After the Christmas break and many many wet days. I got a welcome break from the Turbo and got out for a spin. It was mainly an easy spin to explore a new route incorporating Woodcock Hill. Into a headwind for the first 20km or so and then 5.5km up Woodcock Hill. The hill has a 5% average gradient but ramps of up to 10%-13% in places so it was a nice fitness tester. Got to the top without too much trouble and the legs felt fine even though I was out of the saddle for each ramp. I guess the winter training and strength exercises must be paying off! A chilly downhill descent and a tailwind home completed the 63km spin. Unfortunately the Garmin went to sleep while I was fixing a puncture 3km from home and I lost all of the data from the hill climb. Does it still count if I can’t post it on strava? 🙂 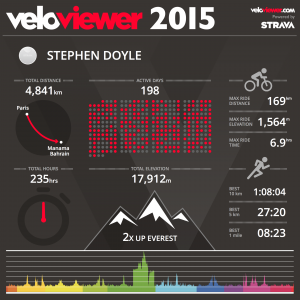 Information on the Col de Jous Plane which is billed to be a brutal climb by all accounts. From wheelsuckers.co.uk:

“Totaling 7.3 miles (11.8 km) at an altitude of 1700 meters, the Col de Joux-Plane, approached from the town of Samoens, has an average gradient of 8.5%, with a maximum of 14%. Statistics that may not immediately strike one as particularly intimidating, but it is the unrelenting nature of the climb that makes the ascent to the Col so merciless and unyielding”

“They don’t come much harder than the Joux-Plane. The first two kilometres do nothing but lull you into a false sense of security as you leave the town of Samoens. At the first hairpin the climb gets tough with you, and by the top you will feel brutalised by the savagery of its slopes. The compensation though is the view. The top of the Joux-Plane is an open, grassy place dominated by Mount Blanc and its image reflected eerily in a summit lake.

The climb is more difficult than Alpe d’Huez The great Tour climber Lucien van Impe rates it as one of the hardest he’s seen, and you can’t get a better recommendation than that. The road travels upwards by twisting and turning to seek out the natural lines of least resistance up it’s fearsome slope, but cannot avoid a terrible stretch of 13.5% at just over six kilometers.”

After that comes a short stretch of 8%, but don’t get carried away here because it is not time to celebrate. Save something for the final three kilometers of 9 and 10%, the last two of which is dead end straight and a little bit soul destroying.”

I’ve just signed up for the Etape du Tour 2016. This will be my diary for the event.